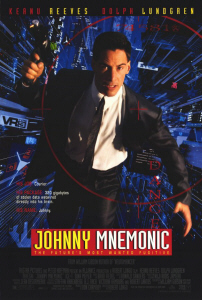 Truth be told, I kinda like Keanu Reeves. Oh, he's a shitty actor (in any given role a potted plant could do better), but he's charismatic, in his own way, and he seems like kind of a nice guy. So I decided to go into this movie with an open mind, basically by ignoring everything I know about computers and, like the producers, pretending that the Internet really is an actual alternate dimension as portrayed in movies like The Lawnmower Man (1992) and Tron (1982) (and, inexplicably, again in 2010), and not merely a convenient conduit for thirteen-year-olds to call me a faggot on Reddit. Besides, the guy who wrote this movie basically invented cyberspace, so let's face it, anything he got wrong, fuck you, no he didn't.

So, Keanu plays portrays acts... Fuck. Okay, just accept that he's this guy, alright, this guy who's got computer hardware in his head and hires himself out as a sort of cybernetic courier. Basically, you upload information into his noggin and he smuggles it to another location where it can be safely downloaded. How this is preferable to just shoving a thumb drive containing the data up his ass is actually explained, but how it's easier than simply encrypting the information and e-mailing it to the intended recipient isn't. No matter, I said I'm giving this one a chance, so fine, I'll buy their (stupid) premise. It's fucking stupid though.

Naturally some bad guys are after the information in question, but Keanu's biggest problem is that the data currently loaded into his brain is 160 gigabytes over his personal capacity, which we're told is extremely dangerous. This is probably supposed to generate some additional suspense, although if Keanu Reeves shorted out half his brain I doubt we'd notice any change in his behavior whatsoever. There's plenty of violence; lots of trench coats; Ice T and Henry Rollins appear, apparently competing with each other to see who can give the most embarrassing performance (Rollins wins); the fashions are hilariously out-of-date 1980s futurisms (I can't remember the last time I saw so many people who looked like they were auditioning for the band Split Enz); the main chick is exceptionally hot and has a terrific ass; Keanu's mid-movie rant about wanting a club sandwich is fucking hilarious for all the wrong (and therefore right) reasons; and the thrilling climax, which involves a crossbow fight with the Yakuza, a junkie dolphin reading Keanu Reeve's mind, a last-minute rescue by an electronic ghost, and He-Man being cooked alive, is so delirious you can't help but love it.

Ultimately, Johnny Mnemonic is no dumber than The Matrix (1999), and unlike The Matrix it doesn't blow its entire wad twenty minutes in and then just flail around for the rest of its running time plus two even-worse sequels. In short, I liked it. And no, I'm not being sarcastic or ironic - I actually liked it. Scout's honor.

Nigel Satanism
My professional name is Mr. Satanism, and I've been a supervillain since the late nineteenth century. Remember all those times the world was almost destroyed? That was me. Now I write books; they're hilarious and you should read all of them. Look me up on Amazon, or wherever awesome books are sold.